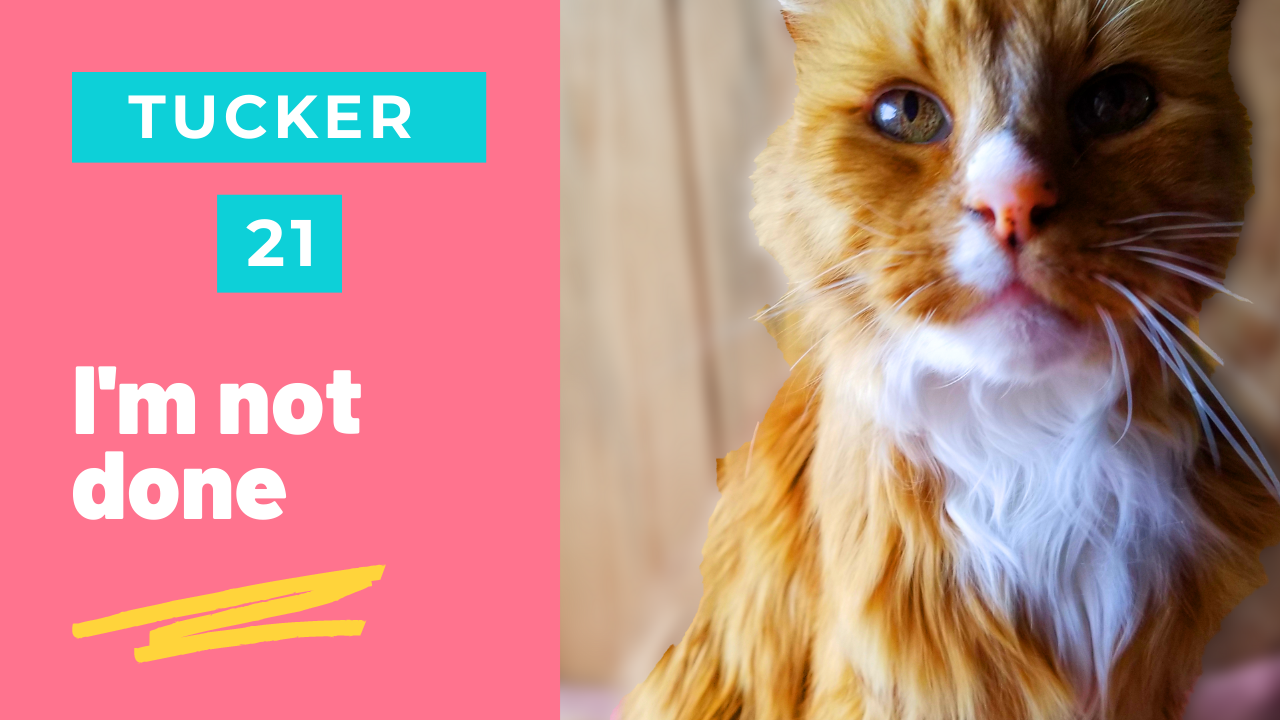 I have this handsome orange kitty named Tucker. He’s 21 years old. You know, in Chinese Medicine, they talk about the Fall of your life where you get to reap the rewards of the life you lived. I was watching Tucker the other day, sleeping in the window. He was passed out and very content. This was his life, and he was finally letting himself enjoy the Fall of his life.

I bring this up because it hasn’t been easy getting to 21. Tucker has cashed in on his nine lives. It started when he was 18 years old, and he started losing weight. Then he refused to eat, became constipated, and I just thought everything was done. As humans, we hear this from our doctor’s enough, “Oh, you’re getting older. These things happen.”

I have clients who refuse to go to their doctor because their doctor will tell them. “Oh, you know, you get knee pain when you’re older. Don’t be so active.” “You’re getting up in the middle of the night to go to the bathroom. Yes, that is what happens when you get older.”

You know, in Chinese Medicine, these are not normal signs of aging. Because I’m talking about Tucker, if you want to get more input on how Chinese Medicine sees aging, check out my blog:

Anyways, that was what I was telling Tucker. Then my husband told me I had to do something because Tucker’s constipation was so bad. O.k., it’s always a little tricky figuring out what to do with animals because they don’t talk to you. They just look uncomfortable.

I looked at everything and thought about IBS and constipation and was able to pull something out of Chinese Medicine. The neat thing about animals is they respond so much faster than we do. It’s like they have these bodies that lack all the toxicity we are carrying around.

Sure enough, within one day, he responded and was feeling better. This meant that since I was treating him for IBS, he was sensitive to his food. I spent the next month testing out different foods to see which ones he could eat. Over the last couple of years, every once in a while, something would happen, and Tucker would look like he would pass, and my husband would ask me to do something, and I would.

The thing is, you can’t believe how stressful that is. I mean, I really feel obligated to fix Tucker. So, you know, I try something, and I obsess over it and micro-manage his responses and change things up based on what happened. It’s exhausting.

Well, last month his partner of 19 years, Monkey, finally called it quits. Monkey, another boy cat, was done. We wrapped him in a blanket and took him to the vet. Tucker followed us to the door as we left with his companion.

Monkey just laid with me. We stayed with Monkey, holding him and talking to him until he was long gone. Then we came home without Monkey. Tucker was at the door looking for Monkey. I think Tucker thought we would always be able to save them. But, you know that just isn’t real, and Tucker fell into a depression.

My husband and I were giving Tucker extra attention, and it was o.k., but losing Monkey seemed to have changed his desire to live. He slowed down on his eating. And then one day he didn’t eat. He was losing weight and looking haggard. My husband and I talked through this. I didn’t believe I could do anything this time because I couldn’t fix a broken heart.

The second day of not eating came and went. Memories of my mother stopping her eating came to mind. She decided she was done with life, and she stopped eating. I think I learned that, in the end, all the medicine in the world could help, but there is going to come a time when it will only be up to you to decide if you are going to live.

Tucker had made his decision, and my husband and I decided we could honor his wishes and take him to the vet. So, we bundled up the exhausted, emaciated companion of 21 years and headed to the car. I sat down in the car the closed the car door, swaddling Tucker in a soft blanket.

All of a sudden, Tucker woke up. This poor little cat who had been listless and lacking any interest in food woke up, started meowing and fighting to get out of the blanket. Clearly saying, “No.”

Back into the house, we went. I put him down, and he immediately demanded food and started eating. Afterward, he wandered back into the bedroom, jumped on the bed, found his favorite spot, laid down, and fell asleep, completely content.

Tucker decided he wasn’t done. Sure, he was 21, but he wasn’t throwing in the towel. The Fall of life can be the most rewarding and relaxing as you watch everything you’ve done in your life bloom. And that is where I found him that day passed out in front of the window basking in the sunlight, finally letting himself enjoy the life he has and has lived.