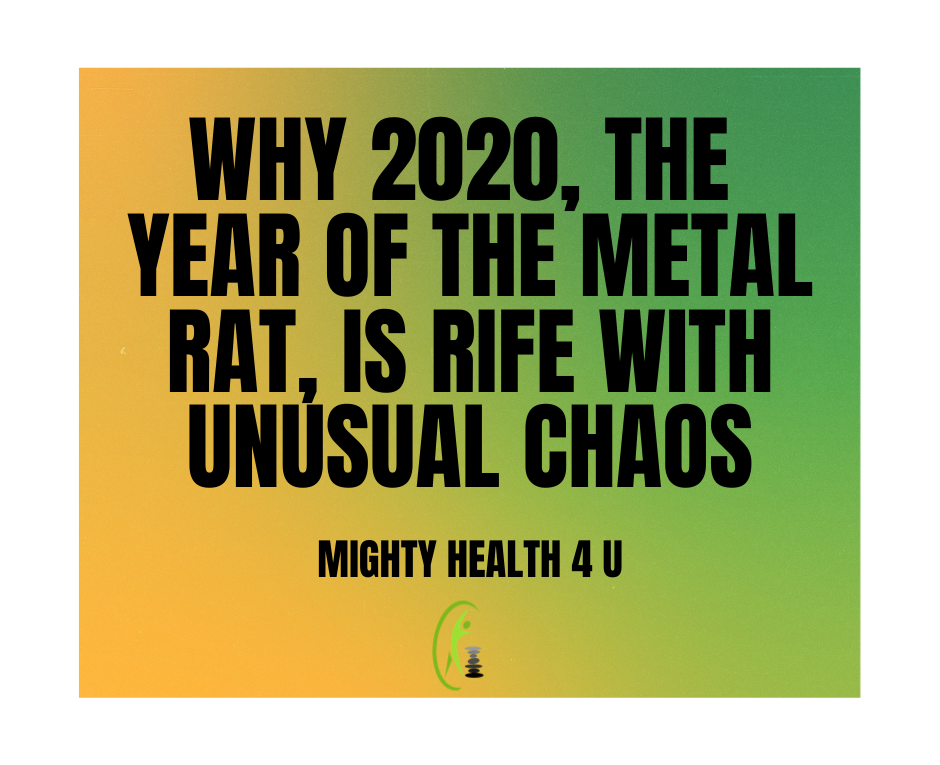 I’ve been spending time listening to motivational and spiritual leaders to help keep my focus in a positive direction. But, I also use Chinese medical theory to help gain guidance through difficult times.

Chinese Medicine studies the energetics of an object to gain an understanding of how things will progress. The theory has a predictive quality, which has left me puzzling about the strange situation we find ourselves in today.

This blog is about the esoteric part of Chinese medicine theory. It explores the mysticism and oracles of this ancient medicine as it applies today. I’ve been thinking a lot about the year 2020, and if you’re interested in the journey, come along.

In Chinese Zodiac, there are 12 animals. Each animal represents a year. Each year is attached to one of the five elements: Water, Wood, Fire, Earth, or Metal. The year 2020 is the Metal Rat.

The element and the animal seem to have a weighty impact on the energetics today. The energetics of Water is about profound change. Water is the energy that restores itself right before a rebirth. In Chinese Medicine theory, Water energy was referred to as the “sleeping” energy or the “dormant” energy that happens before renewal. Water’s renewal would be something as gentle as a seed waiting to germinate or sleep to restore our strength.

It was never described with words like “night terrors” or portrayed as the forceful destruction of a tsunami. Nor was it identified as a hurricane smashing into shore, toppling dikes, and destroying homes. Yet, these are ways Water brings about change.

Water has more symbolism in Chinese Medicine and represents death or an ending to things. I wonder about Water representing endings. In ancient China, Astronomy was a critical science that included a predictive element.

Endings are supported through several aspects of Chinese Astronomy. Precession is the wobble of the earth’s rotation as it travels around the sun. This is the rotational wobble like a spinning top. It takes about 26,000 years for the planet to complete a circuit of precession, and the halfway point was believed to mark a significant change in the world. The last time precession changed, the earth experienced the end of an ice age and massive melting of ice caps. Within the next 10-20 years, precession will have made it to the midway point, marking the end of something and the start of something different.

As precession moves towards its midpoint, the thought was precession would give more intense or focused energy to events happening. The Chinese Zodiac has a 60-year cycle. The current period is at the halfway mark. Both precession and the 60-year cycle are ending around the same time.

But what does Metal bring to the party? The energetics of the year is Metal. In Five Element Theory, Metal is the mother of Water. The energetics suggest that Water is strongly supported this year. Water will be able to do whatever expression Water wants to take because it will have a robust support system. This is the same with kids. Kids that have secure family support systems tend to do better in school and have a better sense of self. Water has that strong family support right now.

This also means there is not much out there that is going to put limits on Water’s expression. With two critical zodiac cycles rotating towards their end, the energetics are heightened. Right now, Water wants to be super chaotic, demanding to wallow in its creature comforts and be accommodated.

The other energetics supporting Water is the Rat and Metal. The Rat is Water, which means the Rat is whatever expression Water wants to be and would be extremely accepting of their behavior. Even if the Rat was uncomfortable with the action, their tendency is to not make waves. And like the doting parent, Metal nurtures Water.

With two cycles coming to a close, it would suggest at the end of this, there is going to be a profound and lasting change. Yet, from all my study of history, no significant change ever ended as it started. The change will be something other than any of us have imagined at this point.

The energetics of the Metal Rat support different qualities in people. According to Chinese Zodiac, these qualities may be more prominent this year.

Every animal and every element has a negative side. The selfish nature in both the Rat and Water makes their relationship almost symbiotic. The Rat is greedy, and Water loves to be comfortable. The Rat with a cautious nature would be prone to being sneaky and manipulative to get what they want. They would be indifferent to their actions, not giving a thought to hurting others if it gets what they want. Water with a desire for comfort will prefer to lay around all day. Cleaning house, working, sharing the load would be uncomfortable and unpleasant. When these two get together and go really sideways, you get the slovenly, resentful, malicious Rat slithering through the alleyways stirring up hate and discontent for their own amusement. They would be prone to addictions and have poor social skills with very few friends. They would be inclined to bullying while hiding behind people or institutions.

Yet, on the other side of this are all the real strengths of the Rat and Water. The Water and the Rat are the most adaptable and accepting of the elements and the animals. The Rat is cautious and frugal and highly intelligent. The Rat with a cautious nature and limited social skills is prone to waiting out the storm just as Water is prone to being the storm. But, Water has a duality. Not only can they be the storm, but they can be the eye of the storm. This is part of Water’s adaptability, and the Rat acknowledges and understands this is the nature of Water. This person would be diligent and highly adaptable, adjusting to the strength and velocity of the wind. They tend to be quiet and keep to themselves accepting that sometimes it rains a lot. If this person had better social skills and was prone to talking, they could also bring balance and calm to the storm. But this isn’t their strength. Being cautious and discreet, they prefer to say nothing and to weather the blast from the comfort of their own home.

All of this suggests the year is going to be rife with chaos. The energetics of the year support chaos with the Rat indulging Water and Metal playing the doting parent to the spoiled child. The behaviors from people that are being most encouraged by the energy of the Zodiac today are tumultuous. Bullying, especially bullying in a situation that allows anonymity will see strong expression this year. These behaviors have little to oppose them. Those that could oppose them will prefer to not say anything.

Next year will be the Metal Ox. We’ll be experiencing Earth within Yin with the Metal environment. The Ox is prone to stability and is conservative in the sense that Confucius was conservative. Confucious found value in morality, labor, family. Earth is the most significant element to place constraints on Water. The energetics of Metal can help dilute the conservative energy of the Ox while continuing to support aspects of Water. Overall, the year should have more stability. The risk is the Ox, with a preference for consistency and dislike of change, may continue the chaos of Water if the Metal element can’t temper the Ox’s desire of business as usual. Or Water could continue it’s rebellious nature under the Ox, but find support difficult to capture.